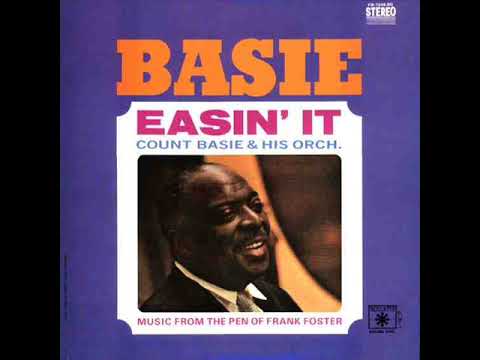 Count Basie – Easin’ It: Music From The Pen Of Frank Foster (Full Album)

AllMusic Review by Scott Yanow:
This set documents a historic occasion. Although Coleman Hawkins had been an admirer of Duke Ellington’s music for at least 35 years at this point and Ellington had suggested they record together at least 20 years prior to their actual meeting in 1962, this was their first (and only) meeting on record. Although it would have been preferable to hear the great tenor performing with the full orchestra, his meeting with Ellington and an all-star group taken out of the big band does feature such greats as Ray Nance on cornet and violin, trombonist Lawrence Brown, altoist Johnny Hodges, and baritonist Harry Carney. High points include an exuberant “The Jeep Is Jumpin’,” an interesting remake of “Mood Indigo,” and a few new Ellington pieces. This delightful music is recommended in one form or another (https://www.allmusic.com/album/duke-ellington-meets-coleman-hawkins-mw0000187976).

Track listing:
All tracks composed by Duke Ellington, except where noted.

Duke Ellington All Stars Feat. Harry Carney - Sophisticated Lady - I Let A Song Go Out Of My Heart
by projazz
1,148 views